I have two more upstairs baths ready to plaster!  Both are en-suite bathrooms in upstairs bedrooms.

Below is the first bath I’ve built with a tub, which requires a lot more brick work than I realized.  To start I built a shelf behind the tub and at the back (away from the faucet).  This shelf both supports the tub and acts as a handy place to put your soap, loofah and rubber ducky.

I tiled the tub surround and back shelf before installing the tub.  I was able to work standing on the floor (vs. in the tub.)  This tile is a massive 1 meter by 50 centimeter format–you only need a few tiles to complete the job.

Next I mortared the tub to the brick base and bolted it to the wall and shelf.  Note the tub is elevated to accommodate the plumbing for the drain.  You can’t put the plumbing in the gap between floors because in Spain there is no gap: the floors are not built with wood beams. 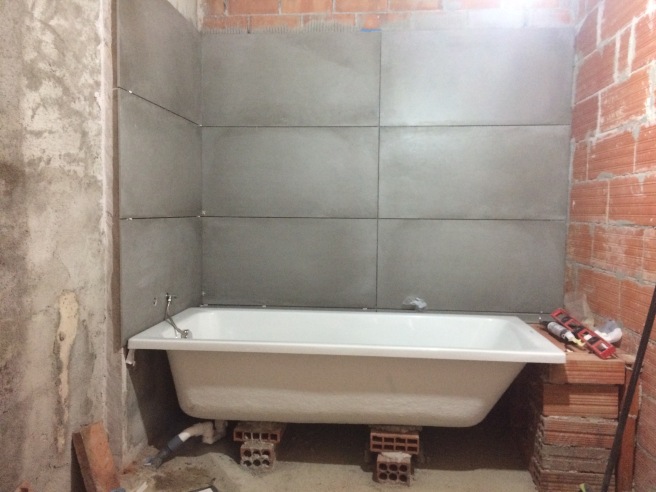 Also, unlike in the US, bathtubs come without a finished front face.  You need to build that face and tile it.  First I made a flat face with bricks called supermaó.

Then I tiled the front face and the remainder of the tub surround.

I had to raise the floor by 10cm with buckets and buckets of mortar, my least favorite task in Spanish building.  With the floor in place and tile grouted, here is the plaster-ready product:

For the final en-suite bathroom, I chose antique-effect white subway tile and two formats of floor tile in a color called “dove” by its overpriced Italian manufacturer. 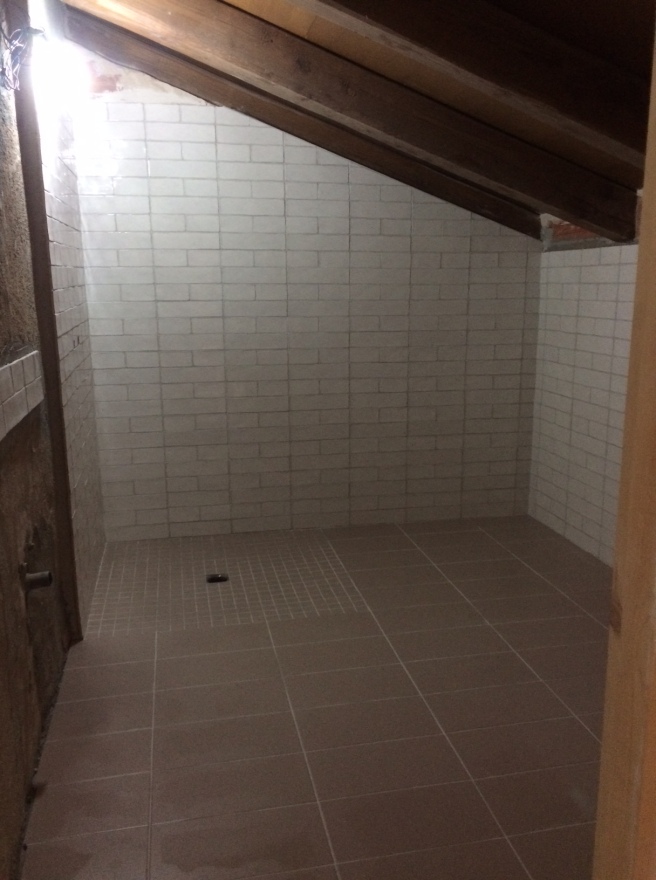 Here, I sank the drain into the concrete slab just as I did in the master bath. The rim of the drain sat 2.5 cm above the floor and I allowed another 1.5 cm for the slope of the shower pan.  This meant raising the shower pan and the adjacent flat area buy 4 cm.  Instead of raising the entire bath floor by 4cm, I sloped downward to meet the 2cm rise in the doorway.  This saved work with the mortar and increased headroom in a bathroom than is a bit tight.  Floor looks flat to me!

There’s one more upstairs bath to share–the powder room or “bath of courtesy” as they say here.  First I tiled a backsplash: 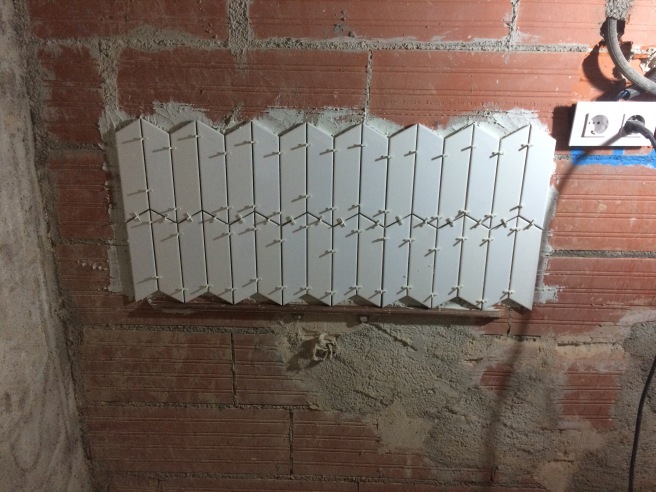 Then more tile on an accent wall behind the toilet.  This was a terrible job because the floor was not level.  I reached row 3 before I realized that the tile was going on crooked (not plumb) and I had to pull all the tiles off, scrape them, wash them, and start again.  Now the tile is plumb.

Because I finished the tile job last spring, I was able to get the plasterer in for this bathroom at the same time as the downstairs baths.  This fall I finished the floor, raising it with an agonizing 8 cm of mortar and adding traditional Catalan hydraulic (also called encaustic) tiles made of cement.  Here is the final product and an action shot showing work in progress, complete with the exit pontoon. 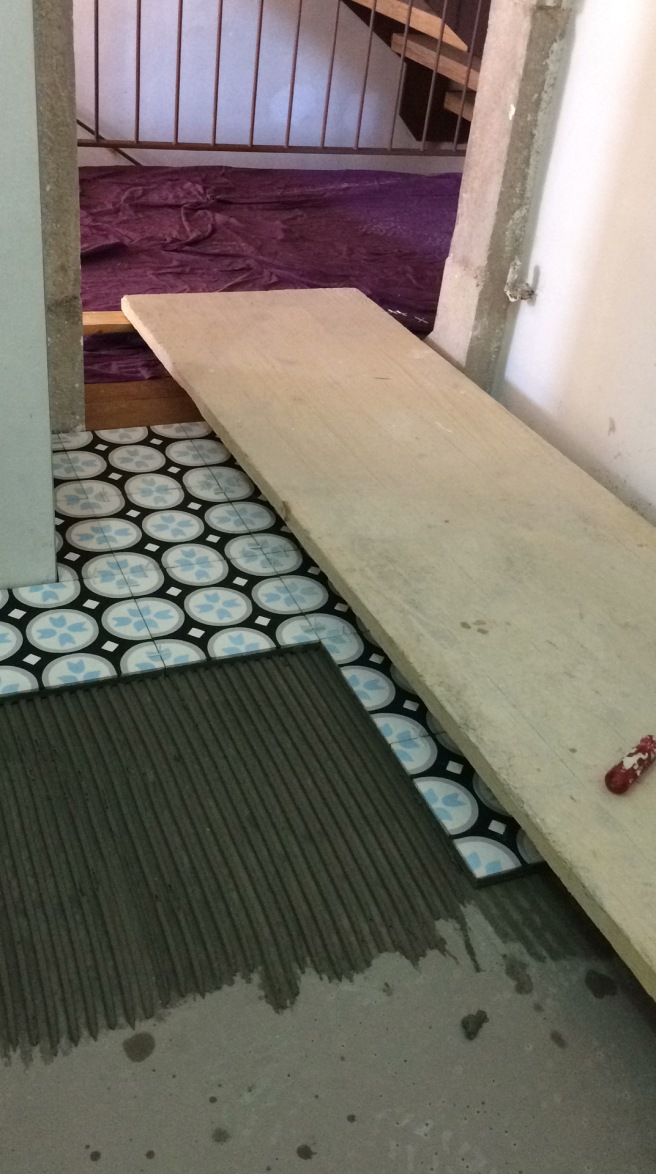 I am creating a highly custom vanity and sink which is In Progress.  I have the countertop and the sink but need to get smitty in to build the iron base.

Next week we will look at the pool!

They say that kitchens and bathrooms sell houses, so I felt a good deal of pressure as I embarked on the master bath.  It only needs to be PERFECT!

I wanted to get the shower drain as low as possible for two reasons.  1. The ceiling is a bit low in this bathroom because I added another bathroom above it.  2. The shower drain is the lowest point on the bathroom floor and the rest of the floor needs to be raised above it–that involves laborious mixing and hauling of mortar, like I did in the kitchen. 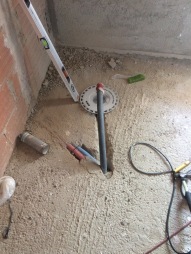 I jackhammered a hole and a channel into the concrete floor for the Schluter Kerdi drain and the drain pipe.  I did so GINGERLY because I did not want to rupture the hot and cold water pipes, which you can see in the photos above.

The drain poked up 2 cms from the concrete slab.  I could not get it any lower.  Given the size of the shower pan, I used a 3 cm grade to the drain, meaning a height of 5 cm at the perimeter of the shower pan.

I tied a 5 cm wooden board to the concrete slab with anchors and screws.  Then I used sand topping mix (4:1 sand and cement with very little water) to establish a 5 cm-high perimeter on the other three sides of the pan.  Finally, I filled the pan with sand topping mix and used screeds to establish a uniform slope toward the drain.  That’s how you build a shower pan.  (N.B. In the USA you can buy a custom-sized plastic one from some very nice people in Georgia.) 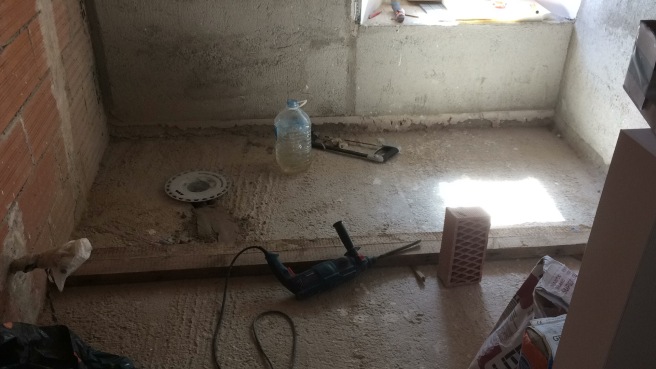 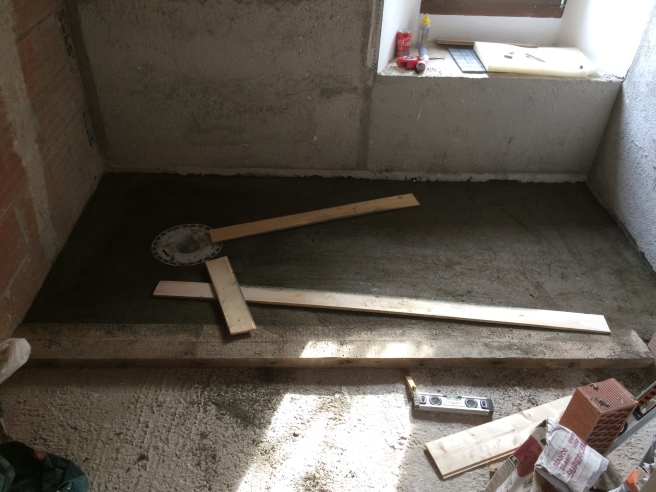 After waterproofing, I tiled the shower pan with a black marble-effect porcelain tile. 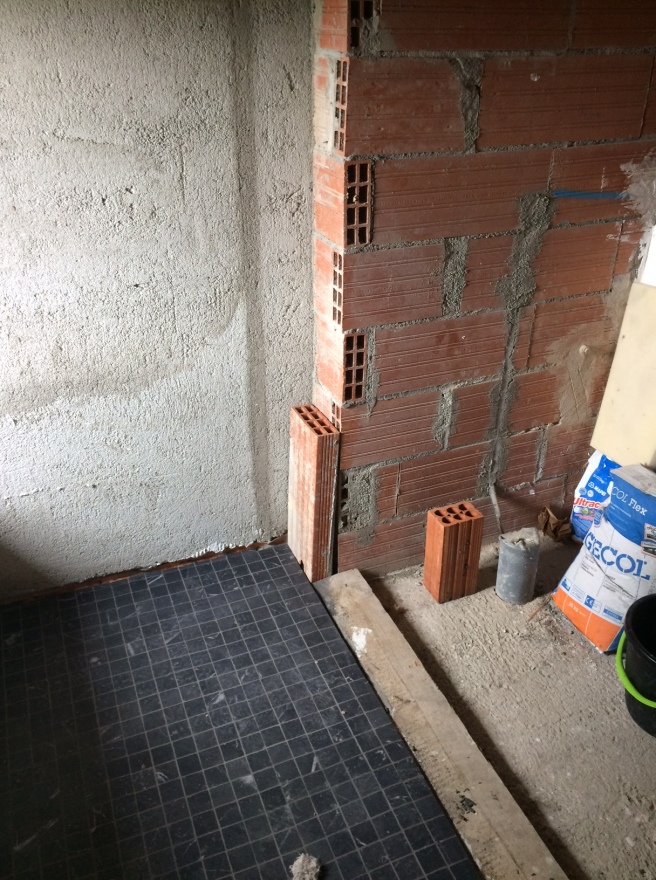 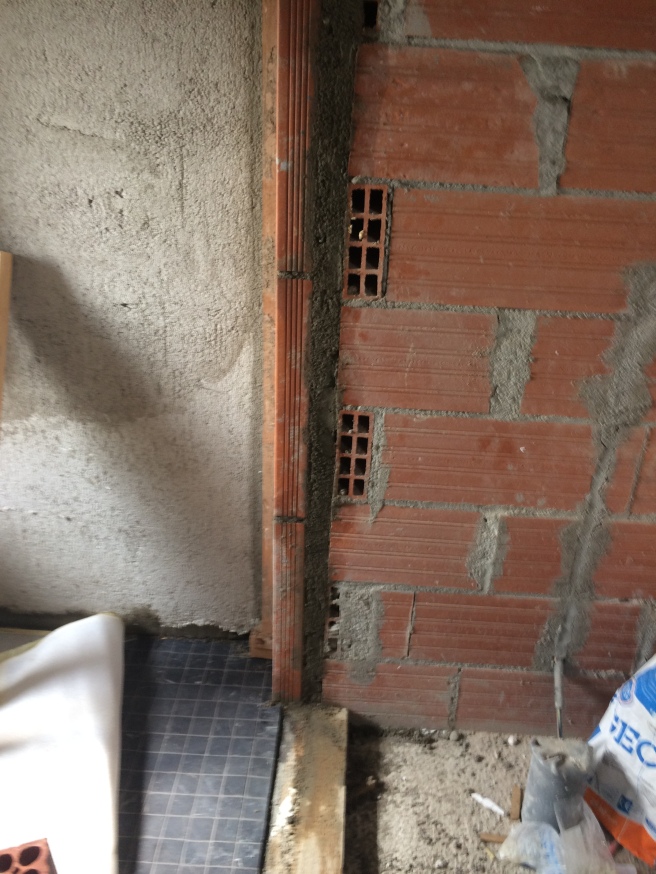 And this is the straightest vertical surface in the house.  By a longshot.  Not to brag, but if you want something done right…

For the shower walls, Roma Statuario from Ceramiche FAP: 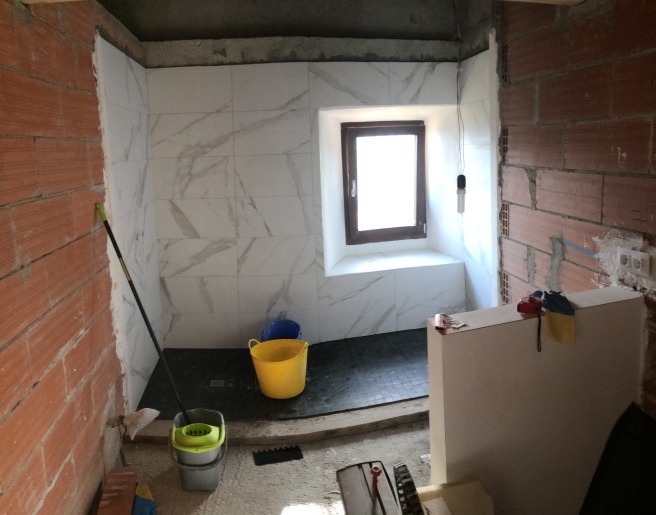 Now I had to raise the remainder of the bathroom floor by 5 cm, which involved unspeakable amounts of mixing and hauling and screeding mortar.  In the doorway I made a short ramp to meet the hardwood floor at level. 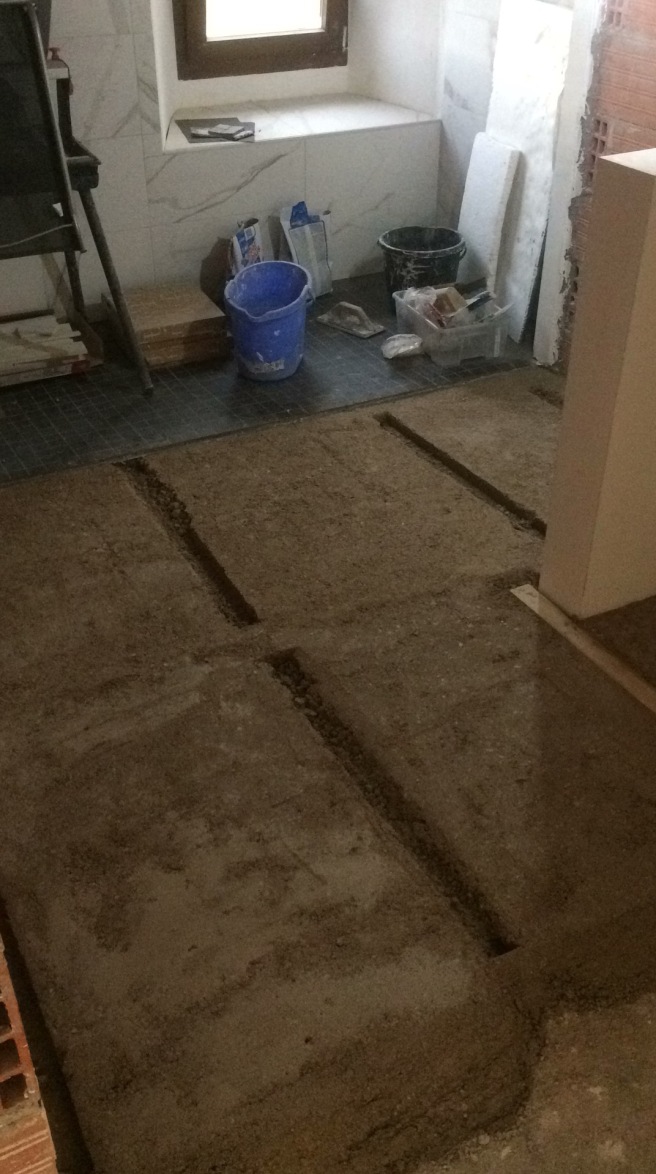 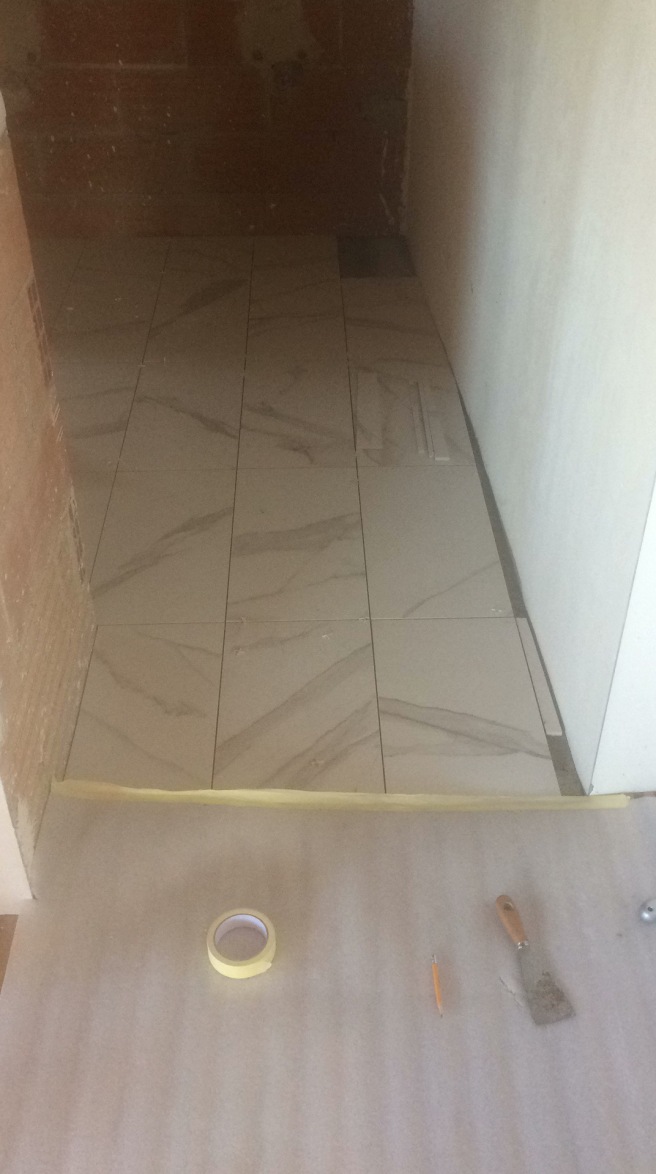 Custom made zero-profile shower door from Lasser, installed by professionals:

I added a micro-mosaic backsplash that coordinates with the 5×5 cm mosaic in the shower pan.  Once the backsplash was installed, I yanked out the vanity to facilitate plastering.  I’m hoping the second vanity install will be more expeditious.

Ready for plaster in the master bath!

Next week we will take a look at 2 more upstairs bathrooms.